Some 93,000 cases were found where customers were left uninsured due to inappropriate sales tactics, paid double premiums, or were denied coverage for paid up insurance policies.

Japan Post Insurance and Japan Post have vowed to correct excessive sales quotas for personnel, in response to some 93,000 recently revealed cases of inappropriate insurance sales, reported The Japan News.

The scandal reportedly stemmed from a push to boost sales of insurance products at Japan Post Insurance at a time when it was struggling to earn profits from trading government bonds amid the current low-interest environment. Insurance sales have been a major source of income for Japan Post, which has been pressured by declining mail volumes.

In the five years through March 2019, about 23,900 Japan Post Insurance policyholders changed their policies upon recommendations from sales personnel, only to find that their applications for the new policies were rejected for health reasons, leaving them uninsured.

Meanwhile, another 22,000 cases were identified where customers were paying premiums on both their previous and new insurance policies for a half year or longer. The cases date back to April 2016.

According to a Japan Times report, there were also 47,000 cases in which customers were not covered by insurance even though their premiums were paid up. 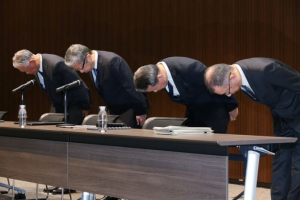 The company had initially denied any wrongdoing, but at a press conference on Wednesday (10 July), Japan Post Insurance president and CEO Mitsuhiko Uehira apologised for the harm caused to the interests customers.

The two companies and their parent, Japan Post Holdings Co, will set up a third-party panel to investigate the cases and monitor implementation of relief measures for affected customers. In particular, the panel will advise on a review of how the Japan Post units set sales targets.

Japan Post Insurance has pledged to pay insurance benefits for hospitalisation or other events under their previous policies, as well as repay all overpaid premiums. It will also introduce a new system that will allow policyholders to apply for new insurance policies without terminating existing contracts.

Earlier this month, Japan Post Insurance banned sales personnel from recommending insurance policy changes that could be detrimental to policyholder interests. It will also set up a task force, led by Uehira, to revamp sales operations.

The company will report on its progress implementing relief measures for affected customer by year-end.

The FSA (Financial Services Agency) is expected to consider administrative penalties for the two companies.

You may have missed